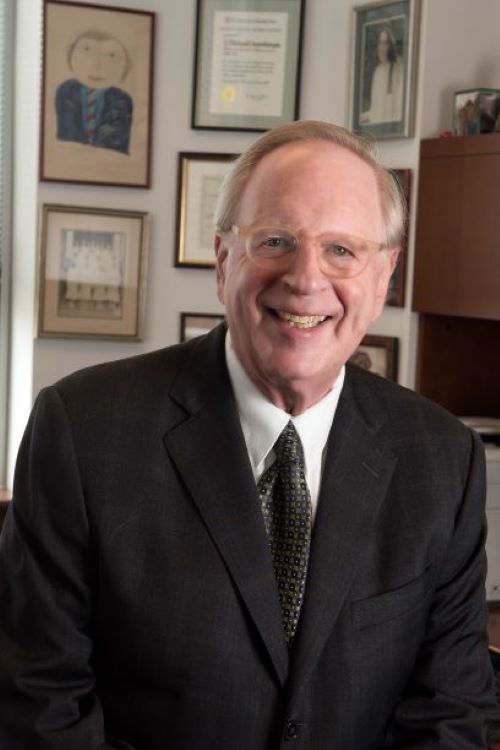 Michael Greenberger is the Founder and Director of CHHS and a Professor at the University of Maryland Francis King Carey School of Law.

Since joining the School of Law in 2001, Professor Greenberger designed and teaches two courses focused on counterterrorism and emergency response, “Homeland Security and the Law of Counterterrorism,” introduced in 2002, and “National Security, Foreign Intelligence, and Privacy,” (originally titled “National Security, Electronic Surveillance, and Bulk Data Collection: The Withering of the Fourth Amendment”) which was taught for the first time in the Spring 2014 semester. He also led the development and manages three related crisis management courses taught by CHHS senior attorney staff members at the law school: “Law and Policy of Emergency Public Health Response;” “Law and Policy of Cybersecurity;” “Law and Policy of Emergency Management;” as well as a course soon to be launched entitled “Law and Policy of Cyber Crimes.” The Center also oversees new graduate specialties in cybersecurity and crisis management at the law school, including a Master of Laws for JDs and a Master of Science in Law for non-lawyers. In fall 2015 Professor Greenberger, along with several faculty members at the law school, launched a special topic course “Freddie Gray’s Baltimore: Past, Present, and Moving Forward” in response to civil unrest in Baltimore. Professor Greenberger has also taught Constitutional Law and teaches a seminar on “Futures, Options, and Derivatives,” while furthering the academic efforts of the University of Maryland, Baltimore as a member of the Faculty Advisory Council for the Maryland Higher Education Commission.

Professor Greenberger is often called upon to lend his extensive professional expertise outside the Center and University. He is currently a member of the Baltimore Washington Cyber Task Force, the American Bar Association’s Law and National Security Advisory Committee, The National Academies’ Committee on Science, Technology, and Law, and by appointment of the Maryland Attorney General on the Maryland Cybersecurity Council where he serves as Chair of the Critical Infrastructure and Cybersecurity Framework Subcommittee. He has also previously served on the CyberMaryland 2015 Advisory Board, by appointment of the Governor of Maryland on the Commission on Maryland Cybersecurity Innovation and Excellence, and as both the Vice Chair and Chair of the Maryland Governor’s Emergency Management Advisory Council. Professor Greenberger routinely comments on homeland security and emergency management topics for local and national media outlets, presents at professional conferences, and is among a handful of experts chosen in 2014 to sit on the inaugural Editorial Board for the international journal Disaster and Military Medicine.

In 1999, Professor Greenberger began service as Counselor to the United States Attorney General, and then became the Justice Department’s Principal Deputy Associate Attorney General. In the latter capacity, Professor Greenberger assisted the United States Attorney General and Associate Attorney General in supervising the work of the Justice Department’s Civil, Civil Rights, Environmental, Antitrust, and Tax Divisions. Also within his portfolio of responsibilities were several counterterrorism projects concerning both law enforcement and public health policy, including organizing a nationwide counterterrorism war game (“TOPOFF I”).

Prior to entering government service, Professor Greenberger was a partner for more than 20 years in the Washington, D.C. law firm of Shea & Gardner (now Goodwin Procter LLP), where he served as lead litigation counsel before courts of law nationwide, including the U.S. Supreme Court.

From 1997 – 1999, Professor Greenberger was a top official with the Division of Trading and Markets at the Commodity Futures Trading Commission (CFTC) working directly for then-Chairperson Brooksley Born. He focused on issues relating to financial regulation and derivatives. He also served on the Steering Committee of the President’s Working Group on Financial Markets, and as a member of the International Organization of Securities Commission’s Hedge Fund Task Force. In 2014 Greenberger became a Faculty Advisory Board member for the University of Maryland’s Center for the Study of Business Ethics, Regulation, and Crime.

Professor Greenberger is a Phi Beta Kappa graduate of Lafayette College and the University of Pennsylvania Law School, where he served as editor-in-chief of the Law Review. He is a Life Member of the American Law Institute and he has served on the Board of Governors of the D.C. Bar and as a board member of three nonprofit public interest organizations. Professor Greenberger has also served on the D.C. Circuit Advisory Committee on Procedures and as a mediator for the United States Courts for the District of Columbia.