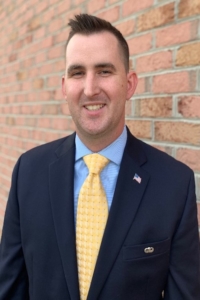 Zachary ‘Zack’ Fry joined CHHS as a policy analyst in October 2020. He holds a Master of Professional Studies in Cybersecurity from University of Maryland Baltimore County (2019) and a Bachelor of Arts in Global Studies from Loyola University Maryland (2013). Zack also attended the US Naval Postgraduate School’s Center for Homeland Defense and Security (CHDS) for the 2017-2018 cohort of their Emergence Program.

Prior to joining CHHS, Zack served nearly four years in the administration of Maryland Governor Larry Hogan, almost three of which were in the Governor’s Office of Homeland Security. High profile homeland security initiatives he worked on include: the drafting and fulfillment of Executive Order 01.01.2017.22 to create a Cybersecurity Plan unifying cybersecurity efforts across Maryland State government; Maryland’s adoption of AT&T’s FirstNet to give Maryland first responders priority and preemption over the nation’s cellular phone network during a catastrophic surge in traffic; and Maryland’s public health response to the Zika virus in 2016.

In addition to his government service, Zack has over 6 years of private-sector experience in the water/wastewater sector of critical infrastructure. High profile projects he has worked on include emergency rehabilitation after the June 2017 steam pipe explosion in Baltimore, Maryland and the July 2019 Howard St sinkhole, also in Baltimore.

In his current role, Zack is supporting the District of Columbia’s Homeland Security & Emergency Management Agency (HSEMA) as a Program Manager on the DC Presidential Inaugural Committee (DCPIC).