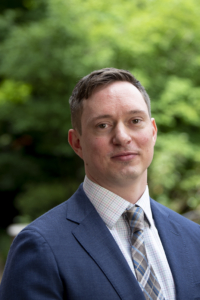 Michael Tennison joined CHHS in July 2017. He earned his law degree at the University of Maryland Francis King Carey School of Law, an MA in bioethics at Wake Forest University, and a BA in philosophy at Guilford College.

Mr. Tennison specializes in legal research and the development of law and policy handbooks, plans, reports, and concepts of operations. He worked on legal handbooks for the Maryland Department of Health and the Maryland Emergency Management Agency, as well as concepts of operations for the Montgomery County Department of Health and Human Services and the Region V Emergency Preparedness Coalition. In addition, he documented the progress of Maryland’s Opioid Operational Command Center during the declared state of emergency over opioid overdoses. Mr. Tennison has also served as an evaluator for a public health preparedness exercise and presented research on pandemic preparedness to the National Academies’ Transportation Research Board. He also assists Director Greenberger with his academic research and writing.

Mr. Tennison received a B.A. in Philosophy from Guilford College in 2005 and an M.A. in Bioethics from Wake Forest University in 2010. After graduating cum laude in 2015 with a J.D. and a Health Law Certificate from the University of Maryland Francis King Carey School of Law, Mr. Tennison completed a legal research fellowship at the Thurgood Marshall Law Library and a judicial clerkship with the Honorable Glenn T. Harrell, Jr. (retired), of the Court of Appeals of Maryland. During law school, Mr. Tennison interned for USDA’s Animal Care Office (through a CHHS externship), FDA’s Office of the Chief Counsel, the U.S. House of Representatives, the Maryland House of Delegates, and the Criminal Justice Policy Foundation. Prior to law school, he worked for President Obama’s Presidential Commission for the Study of Bioethical Issues, the University of Pennsylvania’s Department of Medical Ethics & Health Policy, and Wake Forest University’s Center for Bioethics, Health, & Society. Mr. Tennison has publications in law, science, and bioethics journals. He was admitted to the Maryland Bar in 2016 and remains in good standing.